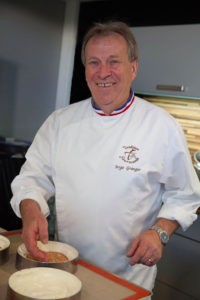 He is a member of the “Académie française du chocolat et de la confiserie”, and a “Compagnon du tour de France”.  He is also honorary president of the  “Tradition gourmande” association since 1991.

He was a pastry and chocolate maker in Mont Richard in France for 33 years, and is now an international consultant and instructor.