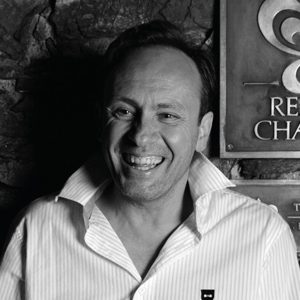 Known for cooking what he calls, the ‘cuisine of the soil’, Drapeau’s dishes are inspired by the seasonal produce of The Vendée region of France, where he grew up. Drapeau is dedicated to bringing to plate the fragrances he discovers in his own garden and the natural tastes of local produce. “What captivated me first was the simplicity of trawlers coming back in the evening followed by the seagulls, the touch of prawns and fish still alive, the challenge of recreating au natural.”

Thierry’s childhood memories of being by his father’s side – a figure whom he fondly remembers as “a cook who spent his Sundays cooking good products purchased from the market” – made a lasting impression on his career choice. At 21 he was appointed chef de partie at La Bateau Ivre, a restaurant with two Michelin stars. He went on to work at other Michelin-awarded venues such as Courchevel and L’Escale before returning to Vendée in 1996.

Ten years after opening his own restaurant, the Logis de Chabotterie, in the French countryside, the venue received two stars in the Michelin guide. It now includes a Relais & Châteaux hotel.